Ron Rosenberg, a first year master’s student in the Mechanosynthesis group was recently awarded a MISTI Excellence Award for demonstrating global citizenship during his undergraduate and graduate studies. Throughout his undergraduate studies, Ron took part in three MIT International Science and Technology Initiative (MISTI) Programs in Chile, Israel, and India – working as a mechanical engineer at companies in each respective country. Now as a graduate student, Ron carries with him his appreciation for global citizenship as a fellow in the TATA program, dedicated to designing a low cost soil diagnostic for rural Indian farmers. As such, Ron travels to India for two months out of the year to take his research in the Mechanosynthesis group and bring it into the field for user feedback and prototype iteration. Congrats Ron! 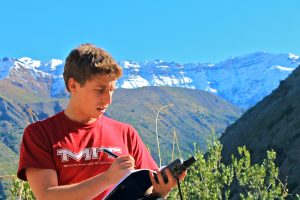